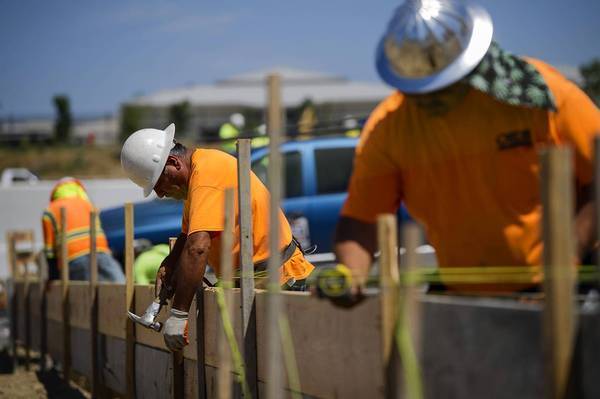 “Growth in GDP has been positive, but not exceptional,” UCLA economists wrote in their quarterly Anderson Forecast. “Jobs are growing, but not rapidly enough to create good jobs for all.”

The report, which analyzed long-term trends of past recoveries, found that the long-anticipated “Great Recovery” has not yet materialized.

Real GDP growth — the value of goods and services produced after adjusting for inflation — is 15.4% below the 3% growth trend of past recoveries, wrote Edward Leamer, director of the UCLA Anderson Forecast. More robust growth will be necessary to bring this recovery in line with previous ones.

That has long-term implications in the face of technological advancements that continue displacing workers, Leamer said. And the country’s education system isn’t adequately developing the workforce of the future, he said.

“Regrettably we reward teachers if their students can regurgitate the information on standardized tests,” he wrote. Future workers will need creative and analytical thinking skills for 21st century jobs, he said.

Though GDP growth has been lackluster since the recession ended, the sustained housing recovery is expected to boost GDP over the next couple of years and further bring down the unemployment rate, Leamer said.

Despite the less-than-rosy outlook for the U.S., California’s economic picture is brighter in large part because of demand for California goods, such as computers and other technology, UCLA economists said.

The Golden State outperformed the U.S. in the rate of payroll jobs growth in the 12-month period that ended in April 2013. Only Utah has added jobs faster than California.

California’s job growth has been spread across several industries, including leisure and hospitality and white-collar jobs in the professional and business services sector.

But construction, which has long been a drag on the state’s recovery, is propelling economists’ optimism about future growth — albeit with some caveats.

Though the number of housing starts has doubled since the recession low, tight credit conditions for new-home buyers have made it tougher to secure mortgages. Young adults are facing staggering student loan debt that will force them to put off buying homes until later in life, said senior economist David Shulman.

“Never before have so many young people been saddled with so much non-mortgage debt, and that burden will keep them out of the home buying market for years to come,” Shulman wrote.

In California, much of the residential construction has been of multiunit housing, particularly in urban areas as people move away from the suburbs and closer to the city. In Hollywood, for instance, Los Angeles city officials have green-lighted a plan to build high-rise apartments and condominiums. Several projects are currently under construction in the neighborhood.

Building contractors, however, are complaining of labor shortages as the lengthy downturn created a dearth of construction workers, said Jerry Nickelsburg, a senior economist who studies the California economy.

Many skilled trade workers switched to different fields to weather the downturn, Nickelsburg said. That means contractors are spending money on training new workers or are likely to invest in labor-saving technologies in the future.

Still, the growth of payroll jobs in construction and other fast-growing industries such as healthcare is expected to generate more income and boost the state’s recovery.

Wednesday, November 14, 2012 President Obama will hold a press conference today to push his deficit-cutting plan as lawmakers in Washington battle over ways to prevent the massive tax hikes and spending cuts scheduled for January 1.  Given the partisan bickering, a bare majority of voters … END_OF_DOCUMENT_TOKEN_TO_BE_REPLACED

By KEVIN CIRILLI | 11/13/12 11:36 AM EST A Montana state lawmaker is asking that he be paid in gold coins because of his lack of faith in the U.S. dollar amid a rising deficit. Jerry O’Neil, a Republican just reelected in his northern Montana … END_OF_DOCUMENT_TOKEN_TO_BE_REPLACED

By AMY BINGHAM (@Amy_Bingham) Sept. 18, 2012 Mitt Romney gave up on winning support from nearly half of the American electorate in May, telling wealthy supporters at a private fundraiser that he could not hope to win the votes of the 47 percent of … END_OF_DOCUMENT_TOKEN_TO_BE_REPLACED

Al Sharpton Gets Meeting With President

Putin threatens to cut off gas to Ukraine...

A Big Thank You to Neal Boortz